Why I Write, part the 1st 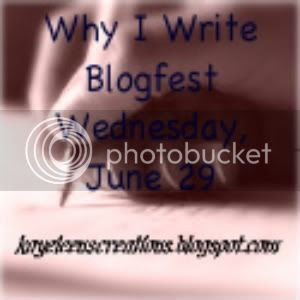 And today's the day. My first blogfest. First, I want to thank everyone who has signed up to participate. I'm looking forward to reading what all of you have to say. There weren't any rules, so everyone should be just saying things like they are. I hope it was as meaningful for you as it is for me.

When I was in high school, I had a pretty awful view of myself. I grew up on the wrong side of town. Not that there is a "bad: ghetto" side of town in Cedar City, Utah, because there isn't really. I just grew up "in the valley." Where all the poorer people lived. I was also the oldest of 8 in a 1-salary family. Dad worked at the local university as staff. Not even a professor. I think the highest his salary ever got during my teen years was 35,000. And that just didn't stretch as far as we might have liked. I got two pairs of new shoes and maybe one or two new outfits in the fall before school started. Everything else was "new to me" but not new.

I looked at myself as the loner. I had one or two close friends, but I didn't really fit in with most groups. I was always super smart and kind of a know-it-all. I was also pretty nerdy. I could be really loud. I never needed the mic when I had a role in the school play. I was always the best friend and never the girlfriend. On top of all that, I was a goody two shoes. And that made me a downer sometimes when people wanted to have a little bit of "fun."

In retrospect, I was unfairly harsh to myself. Interesting how we sometimes see the worst in ourselves.
I wasn't nearly as obnoxious as I thought I was. Although, I was pretty fashion challenged. (Shopping at the DI and never having anything new didn't help that.) It wasn't that bad. I went vintage retro most of the time. And it was cool in college.

In all the people I've talked to, while the specifics of my experiences are different, the emotional content is the same. We've all had those moments of loneliness, fear, excitement, love. There's nothing better we can do with our lives than connect with people on that level. I want to explore those feelings and make them normal and safe. And that's why I write.

You can check out other people's reasons for writing by following the links below and one lucky participant is going to win a special surprise.

Posted by Kayeleen Hamblin at 6:00 AM

Wow. What a heartfelt, honest post. Your childhood resonated with mine (family of 6 kids, hand-me-downs, always being careful about how much we spend...) and though our family's finances improved considerably as we got older, I would always think of myself as the kid who only had 1 peso to spend for snack at school and wearing my sister's too big shoes (I grew up in the Philippines). But you know what I think is the best thing about growing up not so privileged? We learn to work extra hard, we don't easily quit, and when obstacles come our way we shrug it off our shoulders because we KNOW we can rise above it. We don't whine, we're not easily defeated, and we can be passionate.

Thank you for sharing your story.

That's beautiful Kayleen. I relate to this. Thanks for doing this blogfest!

Kayeleen, first, thanks so much for hosting this blogfest. Really had fun writing it, and am looking forward to reading everyone's post.

I can definitely relate to the nerdy/outcast feeling. And yet, here we nerds are, ruling the world! (Or at least, ruling the worlds we write on paper.) Thanks again, for sharing and for hosting this.

Writing is a wonderful way to explore our emotions and insecurities. I'm so glad you designed this blogfest. It's fun meeting and learning about other writers. Thank you.

Lovely post Kayeleen. I'm glad I joined this blogfest, thanks :-)

Thanks for hosting this great blogfest, Kayleen.

I think everyone knows loneliness. I've certainly known my share.

Wow, I just wrote a post on this very topic--how prescient of me! This blogfest is a great idea; thanks for hosting. I was a fashion-challenged loner too, so I can relate to your experiences.

Great post- Thanks for holding the blogfest and exploring those emotions is a good reason!

Thanks for hosting this great blogfest !
As a last-minute participant , my time is limited and so I've kept my post very short !! (2 hrs left for me before time is up , officially ...)

Hi Kayeleen, what a great post you have here, You put me to shame. I could see my entire growing up years as you describe yours and its like looking in the mirror except I didn't have much going on upstairs.I met the deadline, just barely, please find it here.
http://fabulositynouveau.blogspot.com/2011/06/why-i-write.html

Sharon - Grandma is a Writer said...

Kayeleen, I thought I was reading my own story, but it was yours. The only difference was that I only got one pair of shoes and made all my own clothes - that weren't hand-me-downs. We were also on welfare and the ungrateful recipients of peanut butter (which we didn't like), dry beans (which we didn't know how to cook) and powdered milk (which no one could stand since we were living in the Dairy State). I wonder how many of us with this story became writers.

I finally got my post up just a few minutes ago. And although I tried for over an hour could not figure out a way to get the blogfest banner on my website! Sorry. I did link the title of my post to your website so maybe that is a help.

Thanks for hosting this blogfest. I'm off to read and comment at as many blogs as possible before my grandson wakes up.

Loved this prompt, and am having tons of fun reading everyone's entries!

This is amazing Kayeleen! You are completely right, when you state that sometimes we always see the worst in ourselves. A gift and a curse, I like to see it as more of a self-motivation tactic then a downer.

Thanks for hosting this blogfest! I am straight off of work and getting ready to post mine real soon as well as read and comment on everyone's entries as well.

Lovely, inspiring post. Thank you for sharing. On some level for everyone, I think writing is about connecting and exploring.

Irrespective of how few friends you had, you can make new ones almost daily, you can create new ones and keep on sticking to them1!!! right buddy???

with warm regards
Another Author

wow, that loner paragraph sounded like me! only a couple close friends, smart, obnoxiously loud, and a goody goody. but we come out on top =)
thanks again for giving us this outlet to share and meet others!

Thanks for the blogfest! I have loved reading the posts.

And I think the fashion-challenged made the best friends. They were always so humble, loyal, and kind. I bet you're all those traits and then some :)

Thank you so much for setting up this blogfest. My apologies to early readers and East Coasters for getting mine up so late, but it's up now. ;)

Kayeleen, thank you for such a warm introduction into who you were/are. Although I did not feel isolated in high school, much of what you said resonated in my from being fashion challenged (ESPECIALLY during middle school - straight bangs, permed hair all around and ice blue-green glasses as big as my face). Goody two shoes and outspoken drama kid - pretty much sums it up! However, I was one of two kids in a two-income family of school teachers, so while we were by no means wealthy, I was far from a large family of 8 to one income - I can't even imagine the stress of parenting eight kids, let alone on a tight income!

Thanks so much again for sharing and setting this up! It was great and I look forward to making it through the list.

Thanks so much for putting together this blogfest! We all write for different reasons, though some of them seem to come up over and over again. I really enjoyed getting to know more about you and your reason for writing :)

Aw, this is a beautiful, and poignant story, Kayeleen. Thank you for sharing it. I am so, so sad that I missed out on participating :(

Kayeleen Hamblin
I'm a stay-at-home mom, turned author. I have one husband, two little boys, two little girls, and a lot of housework. In between those things, I write young adult books, generally featuring fairy tale themes (at least, so far). I hope to have my books in print some day and spend at least some time every day trying to figure out how to do that. I grew up in a small town in Utah, live in an even smaller town in Utah. Some day, I might leave for the big city, but it's not really likely.

Whenever the mood strikes

A few people I like to call my friends

You can email me at kayejazz @ gmail.com